original title: for better learning -- my eyes of children programming

recently, a relatively hot concept between the children's programming like night, the media and friends often can see "programming will be introduced in the college entrance examination" and "children don't start learning will lose at the starting line" and "future occupation needs" such as reports, should let the children learn programming reason. As a veteran in the field for a period of time, I think from another angle to talk about their children's programming ideas.

has to mention a person, the founder of Logo language and the founder of constructivism (Constructionism) learning theory -- Professor Simon Pipert (Seymour Papert). Because of the factors of life experience, Professor Piper is particularly interested in gear. He said, in his learning career, often able to some others that combine very complex concepts and "gear model", and on the understanding of the knowledge more deeply, but also in the process of playing gear, can often learn a lot of knowledge inadvertently.

well, what does this have to do with children's programming? Combining with his own learning experience, Professor Piper thinks that if every child can find the gear model that he is interested in, then learning will become very active and efficient. But not every child likes gears, and what kind of tool can meet the different interests of each child? The answer is computer. It's a perfect way to build computers to build children's interests through programming, and to learn knowledge inadvertently in this process. So Professor Piper naturally applied his invented Logo language to the field of education, so that children could make mathematics learning visible and touching through programming. Later, MIT Media Lab launched a new generation of programming language on the basis of Professor Piper's Theory -- the very popular Scratch programming language now.

so, children's programming is not a new thing, it is a reflection of constructivism learning theory, with the development of technology, the form will change, for example, from Logo to Scratch, then maybe will change. But it does not change the nature of a tool that makes children better learn.

if the Scratch behind the learning theory of interest, you can go and see Piper professor of these works "Mindstorms: Children, Computers and, Powerful Ideas," The Children's Machine: "Rethinking School in the Age of the Computer", "The Connected Family: Bridging the Digital Generation Gap".

based on the above discussion, programming as a tool is to enable children to find a suitable way of learning, and the ultimate goal is to enable each child to learn more actively and efficiently. So any programming teaching that is divorced from this goal is more or less deficient. I think the attitude to programming learning is:

view 1: the ultimate goal of programming instruction should focus on how to programmatically help students express their creativity instead of focusing on the basic skills of teaching students to program. Of course, the skill of mastering these programs is an insuperable stage of in the process of learning.

seems to be a bit of a commonplace. But I think it's very important to really understand this teaching goal from the heart, because this "Outline" guides the direction of curriculum design.

in order to achieve such teaching goals, from the perspective of teaching design, I think it should be divided into two stages: "learning" and "starting".

"learning" is the basic knowledge of programming, and the ultimate goal of this stage is to help children master the basic skills of programming. Taking Scratch's learning as an example, most children are very interested in the design of some small games, the creation of Makey Makey music and the combination of Minecraft. But a more important point is to make children feel that programming is meaningful, so children's schooling and phenomena in life are suitable subjects, and learning such themes is more likely to resonate.

, fusion primary school mathematics class will learn to the racing game add, subtract, multiply and divide operations, a mathematical knowledge with the actual application of design, on the other hand the game can stimulate children's creative enthusiasm. 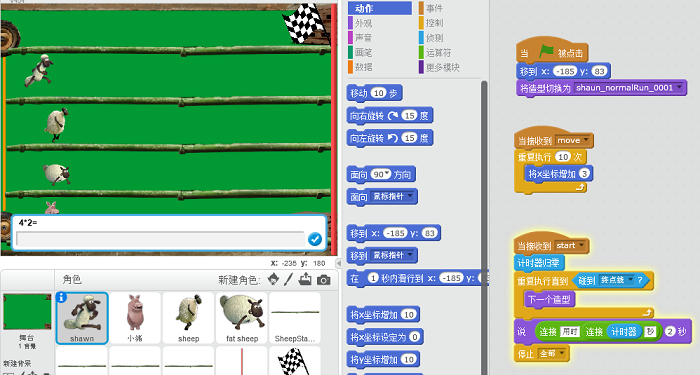 , for instance, in the explanation and coordinate related instructions, introducing small story Descartes invented the plane Cartesian coordinate system, let the children know that the creation of a spider web program is meaningful.

, besides, games such as Minecraft are more popular among children. Instead of simply indulging them in these games, they are more likely to play these games by programming.

From: 为了更好的学习——我眼中的少儿编程
Translate by: Baidu Translate .