original title: Hainan "to the sea" angered the center, this group of satellite images to see the heart pain

12 23 July, the Ministry of environmental protection issued fourth inspectors from the Central Environmental Protection Inspectorate feedback to Hainan Province, said "many leaders reflect, some localities and departments complacency on the ecological environment pleased with oneself, the natural environment is good richly endowed by nature, that is work well done", at the same time, some cities and counties heavy economic development light, environmental protection, eager to make available financial performance engineering, over reliance on real estate, real estate enterprises refer to where, where with the government planning, drum pocketbook, destroy ecology".

inspector criticized the illegal and illegal reclamation of Haihua island and Sun Moon Bay, and the destruction of coastal shelterbelts such as Gao Long Wan and chisi Wan. According to the official website Bulletin of the Ministry of environmental protection and the Hainan daily, thepaper.cn reported that the inspection team had criticized the project and destroyed the natural ecology and style of the coastline.

in Wanning city and artificial island tourist resort Bay Island project in October 2015 month before construction is approved, until only the actual inspectors stationed in to stop the illegal acts of reclamation, surrounding beach has large area deposition and the formation of tombolo, destruction of marine natural landscape. , according to Caixin, a total of 48.046 hectares of reclamation land was built in the Sun Moon Bay artificial island project. The total amount of reclamation for the island is 49.112 hectares. Large scale artificial reclamation is bound to bring a lot of influence to the surrounding ecological environment.

in Sanya city of Phoenix Island reclamation project of sea use rights to acquire the international passenger port and cruise port name, but mainly for real estate and hotel development, because the filling flow variation due to the Gulf of Sanya Island, West shoreline erosion of , for the repair of the beach to spend heavily to make up sand of Sanya bay. In addition, some departments and places do not act as a mess. From 2012 to 2015, the Sanya municipal government intervened in the regular enforcement activities of related departments for many times, resulting in the illegal construction of Sanya Island coral resorts National Nature Reserve and the Small Island Resort Resort within 200 meters of the coastal zone. 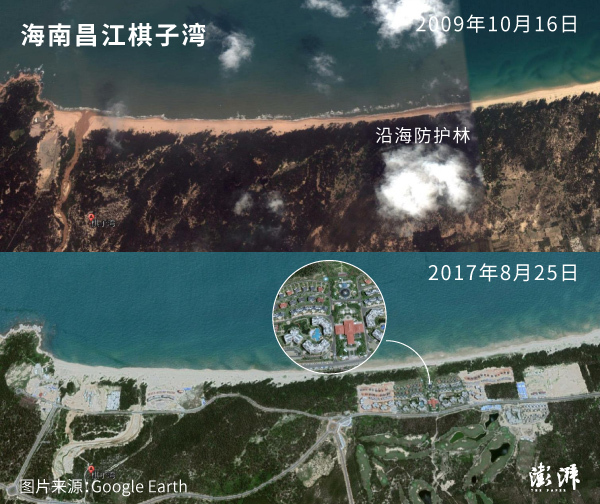 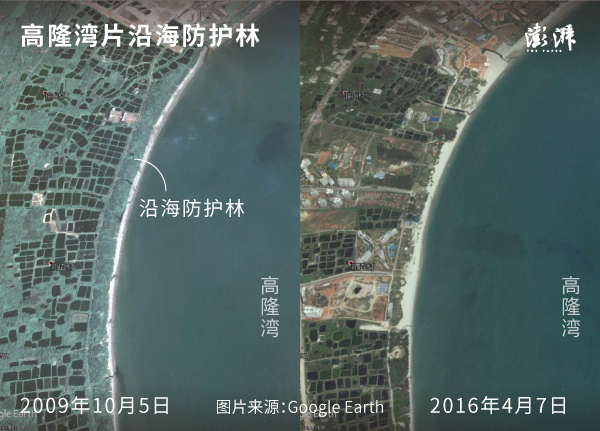 , which was mentioned by the inspector group, but is difficult to observe on the map:

- Qionghai did not supervise and prevent illegal construction of coastal shelterbelt . In November 2015, it concentrated on 13 temporary procedures for illegal buildings in the coastal zone,

-, the fish and shrimp culture area in the of the provincial level Mangrove Nature Reserve of Qing Lan is up to 760 hectares, occupying 31.4% and 20.3% of the core area and the buffer area respectively.

- in Wenchang, the land area of 1333 hectare of Tonggu Ling National Nature Reserve in is totally divided into the development area of ecotourism area, involving 468 hectares of core area and 171 hectares of buffer zone. In 2014, 41.3 hectares of forest land in the natural reserve were planned as hotel land and 5.5 hectares of woodland were occupied to carry out tourism road construction. In the adjustment of the planning process, Provincial Department of land, forestry, housing construction and other strict, open the floodgates wide to.

- 2932 coral land area in Sanya Coral Reef National Nature Reserve has not been included in the actual management for a long time.

From: 海南“向海要地”惹怒中央，这组卫星图看完让人心痛
Translate by: Baidu Translate .