original title: in the United States who have problems to regulate bitcoin "Mingmen" was held in China hand?

alert soared flash crash behind the existence of market manipulation, banning the use of ICO in the issuance of "Securities Act", the US authorities have been too busy, but the latest research report has pointed out that since the majority of the bitcoin network occupy the dominant resources are located in the Chinese territory, the government is likely to become the key Chinese the implementation of the regulation.

investors in 2017 the most popular talk is bitcoin more than 900% days was soaring, and the anonymous transactions avoid regulatory nature, regulators also make the world like ants on a hot pan.

of the U.S. Securities and Exchange Commission (SEC) is also facing the same dilemma, according to the current securities law regulation, the use of digital currency only when investors chase craze is the first token issued "(ICO) by SEC, in order to allegedly disguised issue" securities "lawsuit issued on ICO. This year, although there have been two such litigation, but in accordance with the ICO speed SEC appear like bamboo shoots after a spring rain, far too late to address gaps in this field".

block chain security company Hacken (December 24th) and Gladius yesterday released a research report pointed out that, although the government has ordered to shut down China domestic bitcoin exchange, but currently occupy the bitcoin network dominance of the most stress (hashpower) is still in the China territory, Chinese government can through the investigation did not have room the equipment is powerful force, so that the bitcoin network between the ashes to ashes ("render the Bitcoin network a effectively useless").

SEC can only take "negotiable securities" to talk about

The results of the review were released on 1

CFTC12, allowing bitcoin futures to be traded on the Chicago commercial exchange (CME) and the Chicago Options Exchange (Cboe). The report points out that the virtual currency such as bitcoin is the new commodity category that the Committee has never touched before. (a commodity unlike any the Commission has dealt with in the in).

CFTC acknowledges that the digital currency as commodity status, in fact CFTC and chairman of J. Christopher Giancarlo on the block chain of technological optimism is related, as early as May 2016 speech, Gicancarlo says the block chain technology looking forward to challenge the traditional financial market structure, and hope that the normal development of regulators should not be too harsh financial obstacles innovation (though he also stated his position does not represent the official CFTC attitude). 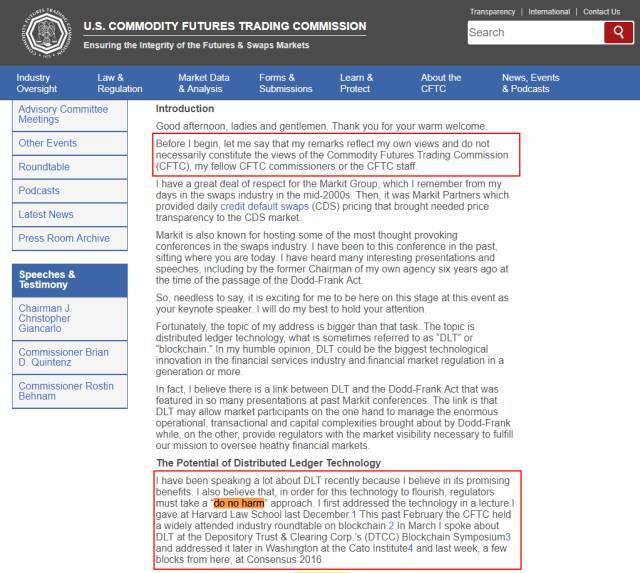 , however, the brutal reality is that, like other commodity categories, CFTC has no regulatory power over the spot market of the special currency. CFTC can supervise corn futures contracts, but cannot supervise the sale and delivery of corn spot.

, that is to say, although CFTC in futures exchange can bitcoin futures more care, but carrying third party trading platform bitcoin bitcoin spot trading, do not have to CFTC or its users to disclose their back office operations and operating rules; for example to provide priority exchange channels on the part of the user (currently a bit spot currency transaction completion time for an average of 4.5 hours), the unfair trade advantage, also can be unpunished.

SEC is also struggling on its own digital currency front. SEC hurts the unsupervised way of the initial currency issuance (ICO). In ICO, people pay for cash or encrypted money in exchange for new issued digital token, so that their owners have the right to get future products or services developed by the company. However, SEC says, many ICO transactions are in fact the "edge ball" of the policy, which is issued unregulated securities.

SEC chairman Jay Clayton12 said in a public statement on 11 June that although many ICO and digital currencies claimed to be involved in public utilities, "many such statements are far more than the essence." That is to say, SEC will focus on the future of ICO for securities features to be regulated as "evidence".

simply calls the token a "functional" token or provides a function through an incentive mechanism, and does not prevent the token from being considered as a negotiable securities.