original title: do you have this operation? Man hit the jackpot to steal the temple merit box

(Beijing time reporter Qi Yun Han Ning reported) recently, the Haidian monastery's virtue box was stolen, the suspect was caught on the spot. What the police did not think of is that the reason for the suspect to steal money is to think that the money has an aura, and to buy a lottery, it must be a prize. 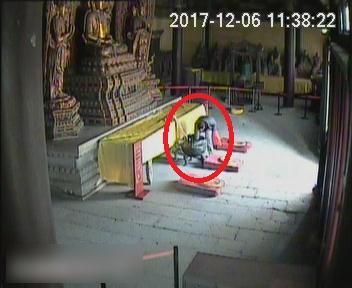 12 6 month 6, the Haidian Public Security Bureau suittuo police station received a alarm call from a temple security department in the district. It was found in the hospital that a man who had stolen money and money was found in the hospital. Police arrived at the scene, and found that the suspect carried in the bag are all kinds of face value paper money, a total of more than 4000 yuan. The police asked the man where the money came from, and the men did it, and the money was taken from the box.

was interrogated, and the suspect did not go to school after graduating from high school, and started looking for a job at the age of 18, but it did not work for a long time. In recent years, Gao has been fascinated by lottery tickets, buying every season, occasionally winning a small prize, and getting a few dollars in bonus. Seeing someone else's high prize is very envious. He expects himself to win a prize someday and become a millionaire. It has been bought for several years and spent all of his savings. A high suddenly think of people inside the Buddha Temple vow, some people also go to public puts money box, there are a lot of money. He thought that all the money was incense and money, and there was aura. If you buy lottery tickets with that money, you will be able to win the lottery. You decide to go to the temple and steal the money from the box. When Gao is ready to leave, he will be found by the temple security guard. In front of the evidence, Gao's confession of the facts of his theft has now been detained by the police in Haidian, and the case is being further tried. return to the Sohu, see more