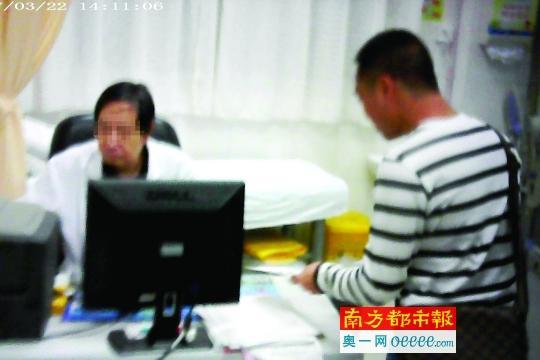 lasted nearly a month, in April this year, Nandu launched an exclusive interview to unveil the Shenzhen medical insurance system. Under the guidance of "Xiaolin", a salesperson, Nandu reporters came to Shenzhen Third People's Hospital, Shenzhen People's Hospital and Nanshan people's Hospital for an experiential investigation.

Nandu survey, reporters found that in the hospital doctor has not carried out any physical examination and provide relevant medical documents under the condition of "diagnosis" suffering from chronic hepatitis B, osteoarthritis and hypertension, hyperlipidemia and other diseases, and prescribe the drug. And the cash or transfer of the "salesman" is used to recover the prescriptions of the prescriptions and complete a complete set of cash flow. After the launch of the report, the Shenzhen Municipal Planning Commission, the Social Security Bureau and three hospitals separately declared that the State Council took the lead, and the ministries and commissions of the Ministry of National People's social affairs and Health Planning Commission participated in the investigation. The investigation team was stationed in Shenzhen to carry out the investigation. Finally, the Shenzhen Health Planning Commission notified the findings of the investigation. Three doctors mentioned in the report violated the relevant regulations, and were punished separately for leaving their posts and canceling the prescription rights.

Medicare cash is not important. Nandu report does not stare at a person or a hospital, but actively guides the public to discuss the current medical insurance system, and experts also advise that we hope to broaden the channels of medical insurance.

this matter has been reported rapidly in Nandu, and has rapidly become a national hotspot. The relevant ministries and commissions of the state have also been stationed in Shenzhen under the leadership of the State Council to investigate. Finally, the State Department of human resources and social affairs has made a statement.

4, the launch of an exclusive report, published the whole process of investigation. The day of the publication of the report, the three hospitals of the Shenzhen Municipal Health Planning Commission, the human society Bureau and the related affairs were expressed by the official channels and the investigation procedures were published.

Nandu reporters in three hospitals experience during the process of investigation, three doctors were not on the Nandu reporters to any physical examination, are not required to provide relevant medical documents, will Nandu reporter "diagnosis" with a variety of diseases, and the corresponding prescription drugs. In the use of social security card to buy these prescription drugs, cash "clerk" Lin and Xiao Wu is half the recovery of these drugs, to complete the program of cash.

in April 18th this year, the Nandu survey carried out unannounced visits to the publication of the report, the Shenzhen Municipal Planning Commission immediately organized the Municipal Health Supervision Bureau, the city medical center, health administrative departments and District 3 hospitals, and three hospitals involved in the morning rapid state table. Shenzhen Health Planning Commission announced the same day, Shenzhen People's Hospital Doctor Chen, the third people's Hospital of Shenzhen, Cui and Nanshan District people's hospital doctor an an have been suspended from the hospital's prescription right, suspended for investigation. At the same time, the multi department combined into the hospital to carry out the corresponding investigation.

from the current medical insurance systemAfter

state social department and other forms of intervention