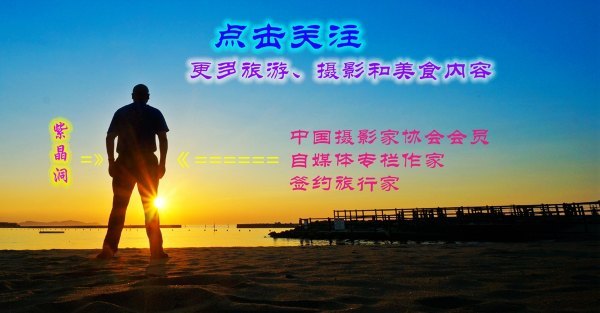 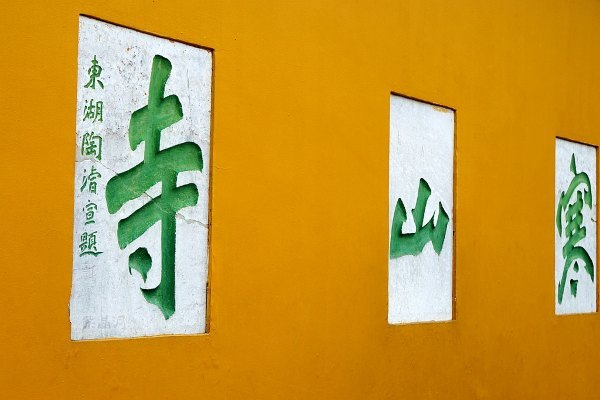 Hanshan Temple in Suzhou, was founded in more than 1400 years ago the beam Daitian prison years, to the Tang Dynasty, because the poem monk Han Shan to the host, only the name "Hanshan Temple", whether it is the legendary five destroyed five or seven destroyed seven buildings, it is thousands of years more and more famous, in front of the Department of the Eastern Jin Dynasty Junxuan pottery inscription the forty-fifth generation sun Tao Yuanming, but his calligraphy, the word "die in the Qing Dynasty Guangxu reign, silver, copper slot are mine. 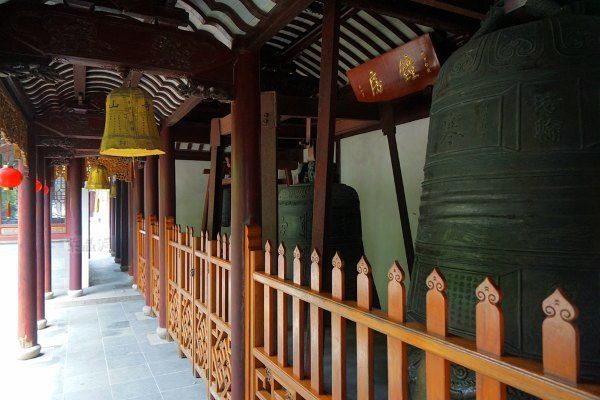 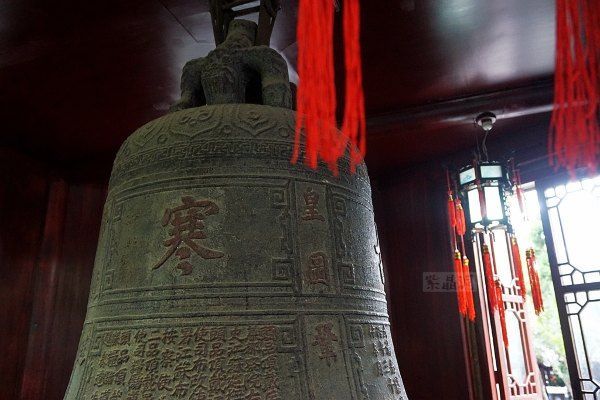 Hanshan Temple bell estimated hundreds of large and small, and has always been, "Tang Zhong had lost, Ming Zhong pin gun, bell hanging tower", today the ancient bell Hanshan Temple has the Tang Zhong Zhang Jishi mentioned in the Jiajing period of Ming Dynasty, and even cast clock has been unaccounted for, "said that in Japan," melted into a cannon; that has been flowing into Japan, such as Kang Youwei's poem: "the bell has been crossing the East, cold as Hanshan Temple maple." So Japan has also vigorously search, but in vain, now hanging on the tower of the iron bell is Qing governor of Jiangsu Chen Kuilong renovation of the Hanshan Temple, for the preservation of monuments, like the old clock style cast bell, 1.2 meters high, weighing about 2 tons. 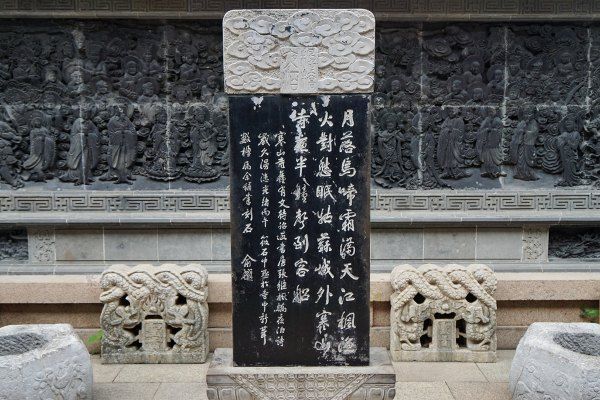 temple is more inscriptions, and writing of Zhang Ji's "midnight bells" inscriptions is undoubtedly the most eye-catching, this is not only a great monument Fengqiao and Hanshan Temple, is also a symbol of maple and Hanshan Temple, this one is the most famous in all the above mentioned is the governor of Jiangsu, by Chen Kuilong in the late Qing Dynasty thirty-two years of vicissitudes of the renovation of the Hanshan Temple, the tablet does not exist, then please famous scholar Yu Yue written poem, when Yu Yuenian was 86 years old, but still its full of feelings, Wentie tricks, Yuanhun hitsui, sway dripping, coherent, but unfortunately, the old man after several days, he suddenly died the. 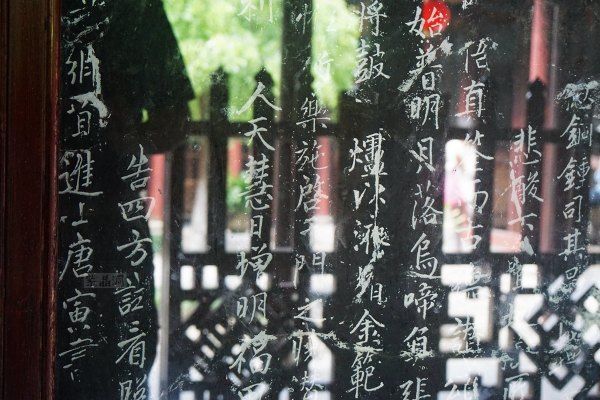 there are countless men of literature and writing inscriptions, can watch carefully, as this is the bell Shu Canbei Jiajing Tang, Suzhou Hanshan Temple presided over the death Jackson for casting bronze donation to the society, as the Tang "Suzhou Hanshan Temple Zhong Shu". 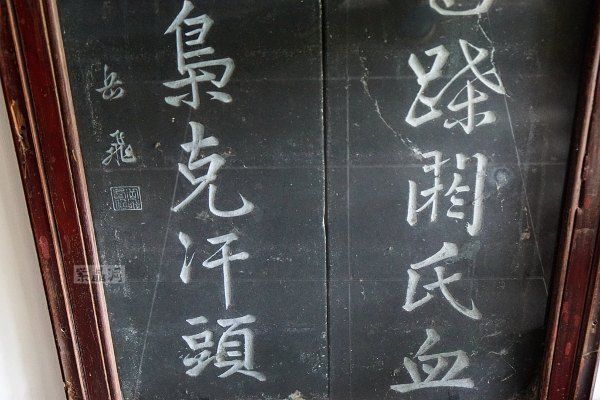 is the most interesting thing in the moment and Beilang national hero Yue Fei wrote: "the sound of breaking three antithetical couplet Ma Yan Zhi blood, five of Khan's owl head", and the signature and seal, why anti gold Yue Fei will stay in Hanshan Temple? According to legend, the two expedition of Yue Fei, attacking Shirupozhu, has hit 45 kilometers away from the capital city of Kaifeng Zhuxian Town, just recovered when Qin Hui Zibo point the day and await for it, leave the decree, a series of 12 gold medals to recall Yue Fei, so he had to Lvjun south from Suzhou via Hanshan Temple outside, by the monk hospitality. Therefore this Shuke, expressed his determination to the enemy, but were gone for ever. 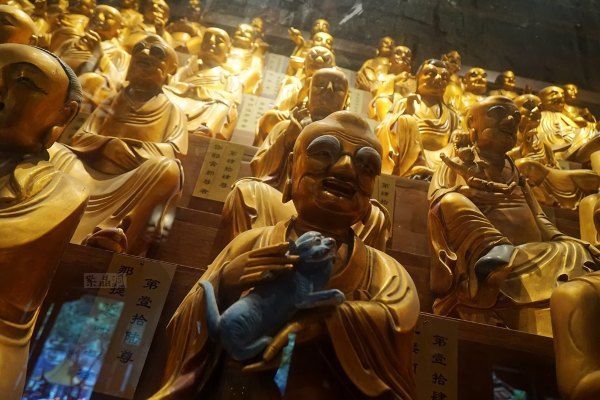 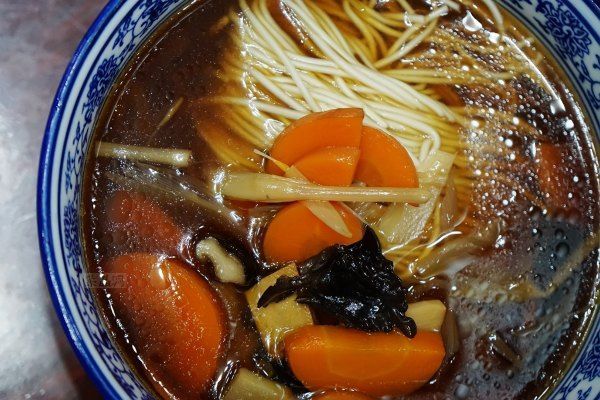 Temple more delicacy not to be missed, Lohan side 15 yuan a bowl of delicious, I also eat third bowls of noodles in the Suzhou, although the first bowl record three yuan Yuxing shrimp 98, second bowl is to spend 176 yuan in the Austrian kitchen Castle Hotel to eat this bowl of noodles, but also favorably.

recall before the two bowl of it, this is the 176 Austrian kitchen red soup, because two people eat a bowl of toppings, so more, duck, braised meat, fried eel, fish, also called half Xu dishes: shrimp pomfret in several other assorted vegetables, peanuts, and St.

From: 来苏州第一碗面98，第二碗面176，这第三碗最出名的面只要15
Translate by: Baidu Translate .