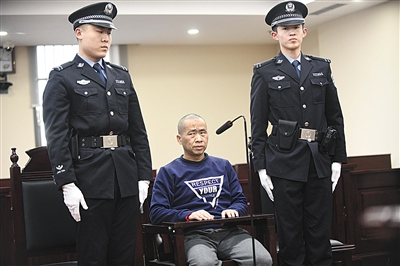 yesterday morning, Zou Mingwu, Beijing's Haidian court trial, was sentenced to 12 years and 6 months in prison for a period of 12 years, and sentenced his "Prohibition of employment" for 5 years. New Beijing newspaper

news of the new Beijing News, parents spent 160 thousand of the "famous teacher and family education", Zou Mingwu, in the process of counselling rape and indecent underage female students. Yesterday, Zou Mingwu, a court of first instance of the Haidian court, was sentenced to 12 years and 6 months, and the sentence was prohibited from engaging in education related to minors within 5 years from the date of completion of the sentence or the date of parole.

reporter of the Beijing News learned that the case is the first case of a court in Beijing declaring a case of "employment prohibition" for the accused of sexual assault. It is also the first case of video protection for victims and their families in the whole court trial and sentencing.

victims "don't show up" to testify to the family teaching

"the victim, can you hear it?" Yesterday morning before the court, the presiding judge passed the microphone of the court and said to Xiao Na (a pseudonym) in another room next to the court.

Xiao Na is a senior sophomore at the age of 17. Because of the rape and indecency of the tutor Zou Mingwu, she was accompanied by her parents and went to the court to participate in the court trial and yesterday's sentence.

"for the protection of minors, we take the present way." The judge said, on the one hand, the victim can convey opinions to the court through voice. On the other hand, "no face" also ensures that her future learning and life will not be affected more.

2015, Zou Mingwu was employed as a tutor of the family. From March 2016 to the time of the incident, he used his tutoring skills in his own family and Xiao Na's family, and forced four times to have sex with Xiao Na, and repeatedly forced kissing and caressing.

"his teaching business has been very good, and this also lets the family decide to ask him to be a tutor." Xiao Na said that the lesson is once a week, but the summer and summer vacation almost every day, and his academic achievements have been improved because of the course. But the teacher on her hands and feet, is the beginning of a small action, by April 2016, the implementation of the teacher and the threat to her one-time invasion, she can't speak.

, she had repeatedly hinted that her parents did not want to continue the tutor class, "but they thought I had been in conflict with my learning and never changed the teacher."

monitored video records of Zou Mingwu's obscenity, and she told her parents to be raped and indecent.

"gave him a total of 160 thousand dollars in class fees, who would think that a teacher in a famous school would do this?" Her father said angrily.

court found that, as a small child's tutor and tutor, Zou Mingwu used his tutoring skills, forced to kiss and touch, and forced sexual relations with her many times.

but Zou Mingwu has never pleaded guilty, and he thinks he is a "teacher and student love" relationship with her. In addition, he said, the case exposure has a great impact on his family, so the daughter can not study in Beijing.

trial, Zou Mingwu argued that she had volunteered to have sex with him, and he did not take coercion.

of Zou Mingwu constitute the crime of rape, the court held that, although Zou Mingwu said Huna is an ambiguous relationship between teachers and students, but the two person micro channel chat does not involve any emotions or ambiguous statement; Tina repeatedly told the parents to replace the tutor, and offered to install monitoring, after being raped and inform parents obscene.

in addition, Xiao Na said in the first public statement of the public security organs that the red birthmark on the left hip of Zou Mingwu was found in the first rape, and there was a photo evidence. But Zou Mingwu said he did not know if there was a birthmark. The justification was obvious, so the court refused to accept the letter.

about whether Zou Mingwu constituted coercive indecency, the court held that Zou Mingwu said he had been in physical contact with Xiao Na's consent. However, surveillance videos showed that NUA had dodged her kisses and strokes, so she refused to accept the allegations.

Haidian court that Zou Mingwu as a teacher with the qualification of the occupation, but also minor Huna and the tutor, but in the process of teaching the use of identity convenience against occupation morals, repeatedly rape, forced lewd minor students.