did not expect to spend nearly one hundred thousand yuan dowry money, married a" grandmother "back, hit the pianhun." Who lives in the town of Zhuzhou Tianyuan District three Tang Aiying Sanxiang to reflect that spent nearly one hundred thousand yuan bride married his son back to his wife, not only the husband, also has been done to my grandmother. Recently, the Zhuzhou police department's help, Ms. Tang has saved 70000 yuan loss.

Tang Aiying told reporters, son Xiao Wu, 30 years old, not married, anxious elders in the family. In May last year, Xiao Wu's uncle met a matchmaker in the neighboring table, Xiao Wu claims can help find objects in Yunnan. A few days later, the matchmaker to love the girl to the Tang Ying photos, "he said the girl one or two years older than my son, I think of energy-saving, as long as it is a good thing."

matchmaker with a small Wu rushed to Yunnan, and a woman in a white met, asked Xiao Wu is satisfied, "because the night's sake, only to see the woman's age a little older than me, the other is OK, I will say happy." After the meeting, the matchmaker told him that the woman also took a fancy to him, but before marriage, need to pay 96 thousand yuan bride price money. Xiao Wu said, hear this matchmaker, heart is happy and have concerns, he proposed to take a look at the woman in a white card and then pay the dowry money, "the matchmaker told me that people can go with you, see what Id, I think it is. The family to turn over the money."

paid the dowry money, in repeatedly asked Xiao Wu, the white one was ID, Xiao Wu see a white one be startled at greater than themselves, even at the age of 11. So, Xiao Wu asked Huihun, but a matchmaker and white refused to refund, "they say people can go with you, money can not retreat." 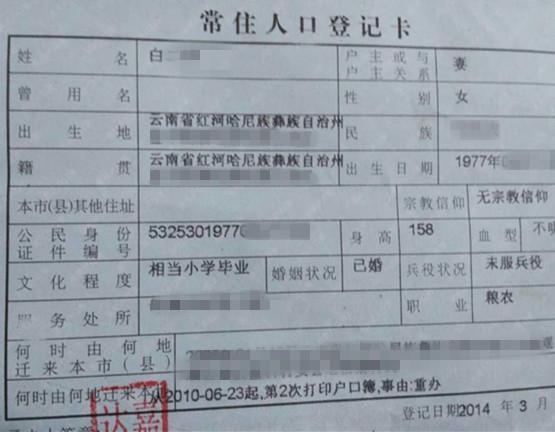 Xiao Wu, in order to avoid life and wealth, had to take a white back to live at home. After living for two months, a woman claiming to be a white niece came to see her and lived in little Wu Jiazhong. "I think two people are very similar. They are very wrong. Tang Aiying found after the wrong, to put the wedding feast, in the village to register the grounds, to provide the account of the white one, a look back, Tang found a white account of the above, not only shows a white white one is married, my grandmother came to my house, "that girl is her daughter.".

about the incident, Tang Aiying on the spot before and after repeatedly find one family fly into a rage, the matchmaker refund of bride price, but no matter how to negotiate, the matchmaker always insisted, he did not take a penny, all the money in a white and white a matchmaker there. "Betrothal gifts and other expenses, a total of about one hundred thousand, thanks to the help of the public security authorities, to recover seventy thousand yuan."

now, Tang Aiying is looking for legal aid to defend himself. Hunan star lawyer Xiao Hongri said, marriage also together with others to accept betrothal gifts to Pianhun, is actually a fraud, the injured party may request the refund, if the circumstances are serious, but also constitutes a crime.