original title: "children are too small and ignorant" is the favorite excuse of campus bullying parents

, the old king next door, has recently been a bit annoying, and today he was interviewed by the teacher of his son's school, third times this semester. The reason is that the son is a bully in the school. "you say that our kids are so small he could understand what? Now the teacher makes a big deal. " Lao Wang, , calls his wife to complain to the school.

bullies are these "too small" children,

Lao Wang this is wrong, the child is too small and ignorant? The idea of Lao Wang is in urgent need of correction. First, look at the results of the 2017 Blue Book of education in Beijing: 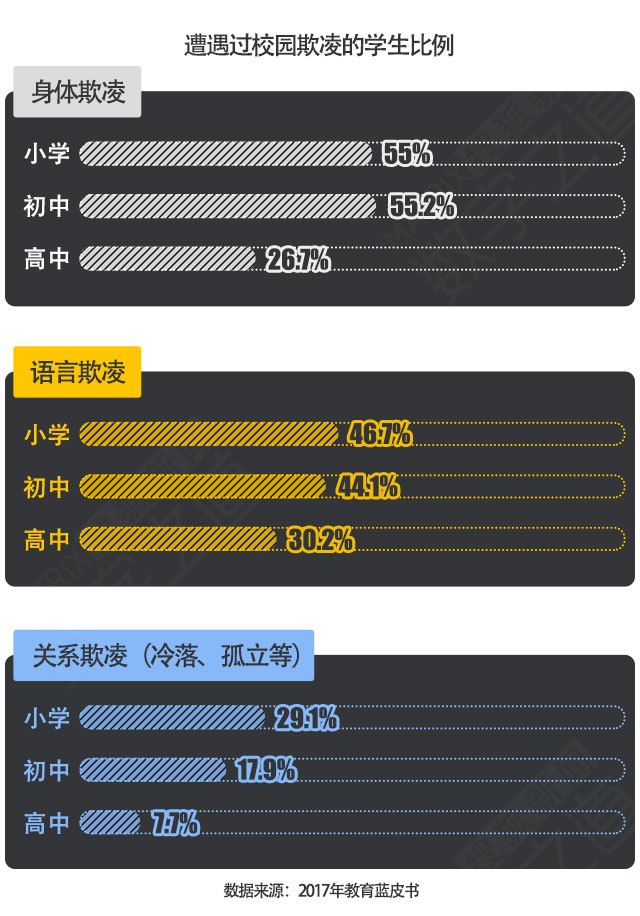 campus bully exists in all ages, but primary school and junior high school are obviously the disaster area. Parents always say that children are young, but primary schools and middle schools are important times for a person to form correct values and moral values. Parents need help to develop in a good direction. Letting children "do not know things" may bring future "bitter fruits".

wandering on the edge of the crime "no sensible"

"how serious can a child fight." For the children in the school is actually hit, Wang not take it seriously, "is certainly among the students were at odds, he also hit the little arm leg?"

but at school, Lao Wang was a little scared. The teacher said the child had swollen the face of the other student. The old king did not think, we did not think, really can not look small children, the central Taiwan has carried on the analysis of the violent way of the campus bullying event: 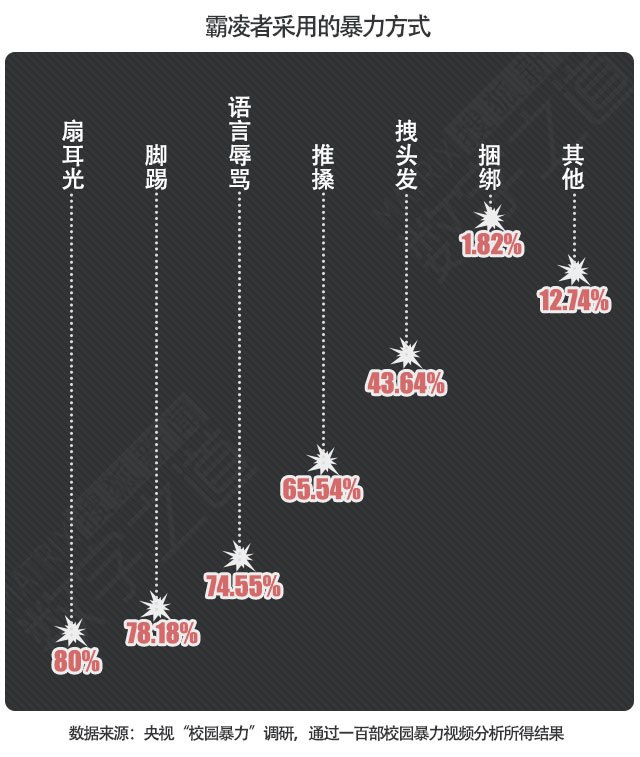 kids to work sometimes completely beyond the imagination of adult, in addition to these, the referee network "bullying" even appeared poisoned, a knife students make adults are terrified of the case.

faced the tragic fact, what did the parents of the bully say?

according to the routines, Lao Wang and the teacher may have the following dialogue, and we cut the scene back to the scene:

's dialogue is not a joke. We read all cases of campus bullying in China's referee's network, and all children's aftermath was served by their parents. Only 4 of the 37 parents who had taken the place of their children to appear in court were mistaken, and the rest of the 33 parents gave their own children a different argument. Summed up, parents to deal with this kind of thing is mainly three big pot strategy: not us! (13 people), the school is wrong! (9 people), you do it first! (8 people)

even if the parents who go to court are full of "pushing pot", there are more phenomena like Lao Wang in their lives. In many China campus bullying is such an excuse for prevarication by parents in the past, as if a child is not sensible sword, you can do whatever they want. How does the child know how to bully the students and how to build the right one?

in the definition of Japan's "bullying" covers a wide range, in addition to slapped, this kind of intense shame grilled clothes, isolated from others, students write down in a small notebook will be listed as "bullying", which in some China parents eyes even "naive" are not.

people often say that bear children must have bear parents, and some parents should reflect on themselves before "pushing the pot". The eleven Department of the Ministry of education, such as the Ministry of education, has issued a plan to strengthen the comprehensive management of bullying of primary and middle school students. The governance program points out that students' bullying should be disposed of according to law, and that the disposition of students' bullying is based on schools. return to the Sohu, see more

From: “孩子太小不懂事”是校园霸凌家长的最爱借口
Translate by: Baidu Translate .