12 on Sept. 25, 2018 national graduate entrance examination after the end, there are more than friends report: postgraduate mathematics suspected declaredyesterday. Multiple real name authentication micro-blog or forwarded or commented on this event. The content of the report points to Li Lin, a "propositional expert" of the Nanjing pilot study.

"a real name authentication micro-blog or forwarded or commented on the net" of postgraduate mathematics declared yesterday. According to the network diagram

Red Star News noted that Li Lin is a lecturer at the school of Mathematical Sciences, Dalian University of Technology. But in recent years, she appeared in the position of" mathematics master "in many postgraduate counseling institutions. After a micro-blog called "teacher Li Lin 2017 of the account issued a statement, the statement inscribed" Li Lin "who denied and postgraduate examination proposition.

according to the official data of the Ministry of education, 2 million 380 thousand people were enrolled in the national examination in 2018, an increase of 370 thousand people over the previous year. Therefore, the suspected declared yesterday after the news, causing great concern. As of 6 pm today (December 26th), "Li Lin" and "higher mathematics" and "PubMed releases the topic" the Dalian University of Technology bulletin "and other related hot spots on the micro-blog hot search list.

Red Star News noted that the report material shows that the alleged "Li Lin declared yesterday is the topic video screenshot. In the picture, the background of the classroom is with the word "examination of the test." There are a number of netizens pointed out that Li Lin predicts the hit rate up to 80%, the two order difference even Chaogang points repeatedly."

Red Star News noted that in December 11th, WeChat has released the official test section "Hi Pu Ben, pilot graduate teacher Li Lin released an exclusive 18 ultimate topic class of postgraduate mathematics video" one article, which said Li Linceng has custody of the exam, and attach photos. It is worth noting that the course named "Li Lin teacher of postgraduate mathematics predicts the ultimate class last year hit 60 points above", but at present, the release of the course address cannot be opened smoothly, web page display, "the course is deleted or does not exist". 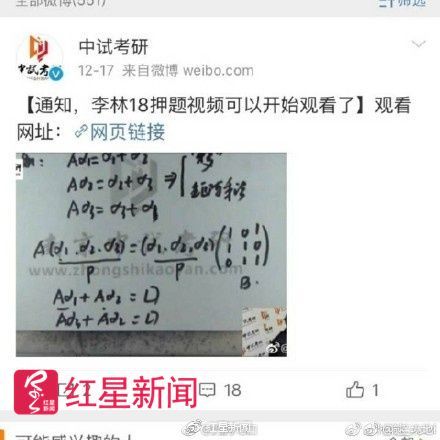 " according to the network diagram

"network video has been deleted according to the network diagram ^, Li Lin is among the "mathematics teachers"