original title: the third quarter of China's mobile phone market, who is the first, HUAWEI or OPPO?

There's a lot of weird things in the

these days - Chinese mobile phone market "best" OPPO CEO ", a release of Chen Mingyong deeply and even some latent crisis, and not to sleep, worry about the outside world and the media are OPPO Pengsha" speech, at the same time with Counterpoint research called China mobile phone market in the third quarter OPPO data ranked first wantonly spread, how many point the taste of schizophrenia.

actually OPPO, this kind of farce, was performed once in the third quarter of 2016, this time it was just a replay.

2016 in the third quarter, several major international market analysis firm Strategy Analytics, Trendforce and GfK quarter of the market report shows that the market share of smart mobile phone China HUAWEI ranked first, second OPPO, and then Counterpoint research released third quarter market report, OPPO became the first media, for such data fight joke can only smile. Because of the later fourth quarter there is no such a joke.

is similar to the last scenario. It is also in the third quarter, also known as the Counterpoint research data report of the Global Market Research Institute, and OPPO is also the first in the Chinese market. OPPO may not even write scripts.

2017 at the beginning of November, IDC announced the third quarter of 2017 China mobile phone shipments market intelligence report, the report shows that HUAWEI shipments of 22 million 300 thousand units accounted for 19.4% market share ranked first, with 21 million 600 thousand OPPO and 18.8% market share ranked second. Before the end of October, Canalys released the third quarter of 2017, Chinese intelligent mobile phone shipments report, HUAWEI shipped more than 22 million units, representing an increase of 23% over the same period last year, the market share reached 19%, ranked second in the OPPO shipments will decline over the same period last year, about 21 million units, accounting for 18% of the market share. Though Strategy Analytics, GfK and Gartner have not released the Chinese market report, but from their data samples and sampling methods, there is not much difference from IDC's conclusion.

but this is known as the global market research company Counterpoint research, the data is released from the OPPO text, published in the OPPO information in the third quarter of 2017, OPPO shares in the China market is 19.2%, the data in the OPPO soft information has become a 18.9%, is not a bit strange.

says here, it's a little weird. Why is the two information in the OPPO market first shown by the Counterpoint Research Report?

in order to make clear the OPPO data source, special swordsman check Counterpoint research website. Surprisingly, the OPPO report is based on the single "report" a quarter is not, its full name is "Chinese Smartphone Market: 2016 and 2017 Overview", even more puzzling is that the report is not only the manufacturer's sales or shipments data, only the market share data, and the list of manufacturers in 2016 Q1 to 2017 Q3 Chinese market share. There are no data samples in the report and the number of samples, the gods like the report. 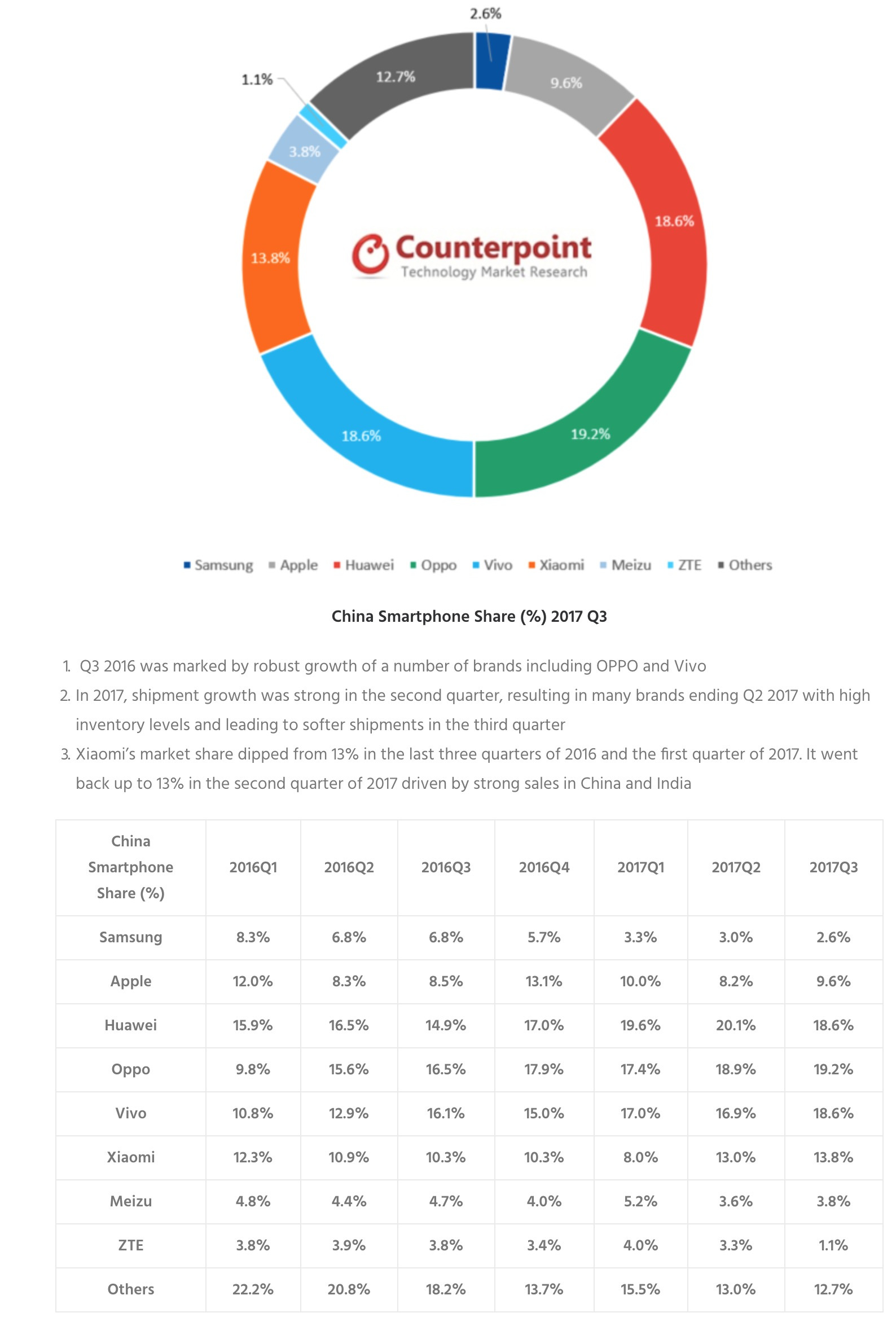 on page Counterpoint of research research, especially in the striking position to write this sentence: "RESEARCH:Our Industry Research & Analysis is specifically tailored to; your needs, English good students can judge for themselves, in an odd swordsman opinion, this company did not lose the bottom line, like the same exemption" statement ", also shows that their report was ordered to report.

Counterpoint research is a registered company in Hongkong, the site is 2011 registered, but the content of the website is all English, although there is a Chinese label, but a dead end. The magic of the market research company, not introduced not only in Baidu, and even Wikipedia do not have any data. The most amazing thing is that the news on Google is all Chinese news! It seems that this amazing company is published in English for Chinese users!

and more miraculous, the company issued a report from 2013, and so far, it has published 52 terminal reports.

, now you finally understand why there is no Counterpoint research company in the fifteenth largest market research institutes in the world, but their mobile phone market report has spread widely in China in recent two years.

get to business, for China hand manufacturers, whether technical strength and market share as we all know, the duty of OPPO as its CEO Chen Mingyong said, it should be understood that by the inflow of the market research company report is unable to support OPPO as "head card", by playing "live flowers" is not last long. As for the title in question, do not say the swordsman.

seems to be a market research institution

From: 第三季度中国手机市场，到底谁是第一，华为还是OPPO?
Translate by: Baidu Translate .