original title: "Hangzhou delicacy recommendation" once rejected Michelin, the 35 years of experience working in the Sushi Japanese restaurant on Lake

Video: Japanese restaurant is located on the 18 floor of the Hangzhou Friendship Hotel by the lake of the moon, an architect in strict accordance with the format of classical Japanese custom design, and the whole layer of 360 degree transparent windows, pure Japanese style with West Lake line Beauty Restaurant in Japan from 32 years of chef Mr. Ito personally Zuozhen, top Japanese cuisine delicacy for the guests at the same time, the translation company can communicate with the chef guy, delicacy culture, love, passion, chef affinity and funny personality, to enjoy the delicacy of time has become very relaxed!

friendly hotel is Hangzhou star hotel in the old hotel, located in the hinterland of lakeside neighborhood characteristics, high-rise overlooking a scenery in West Lake, great location. The 80s and 90s is the reception of Japanese guest the most professional hotel, named for the "Sino Japanese Friendship", the hotel management style has been very low-key. In fact, the friendly hotel also gathered several of the best daily stores in Hangzhou, and the lake month will be the highest grade.

weekday lunch, the 7 bits of wood sushi face to face with Taiwan, the chef has been my desire, although the ink is limited, but keen delicacy share, always want to learn some about the delicacy behind more profound stories and feelings, then the best way is with food producers exchange.

actually, I think there are more and more restaurants in contact with some of them with feelings. But these stories are often not able to be understood by the immediate guests. For example, the quality of the lift out Binbin Yingbin brother, had been studying in Japan, is not only a good translation, the same is a story of people. 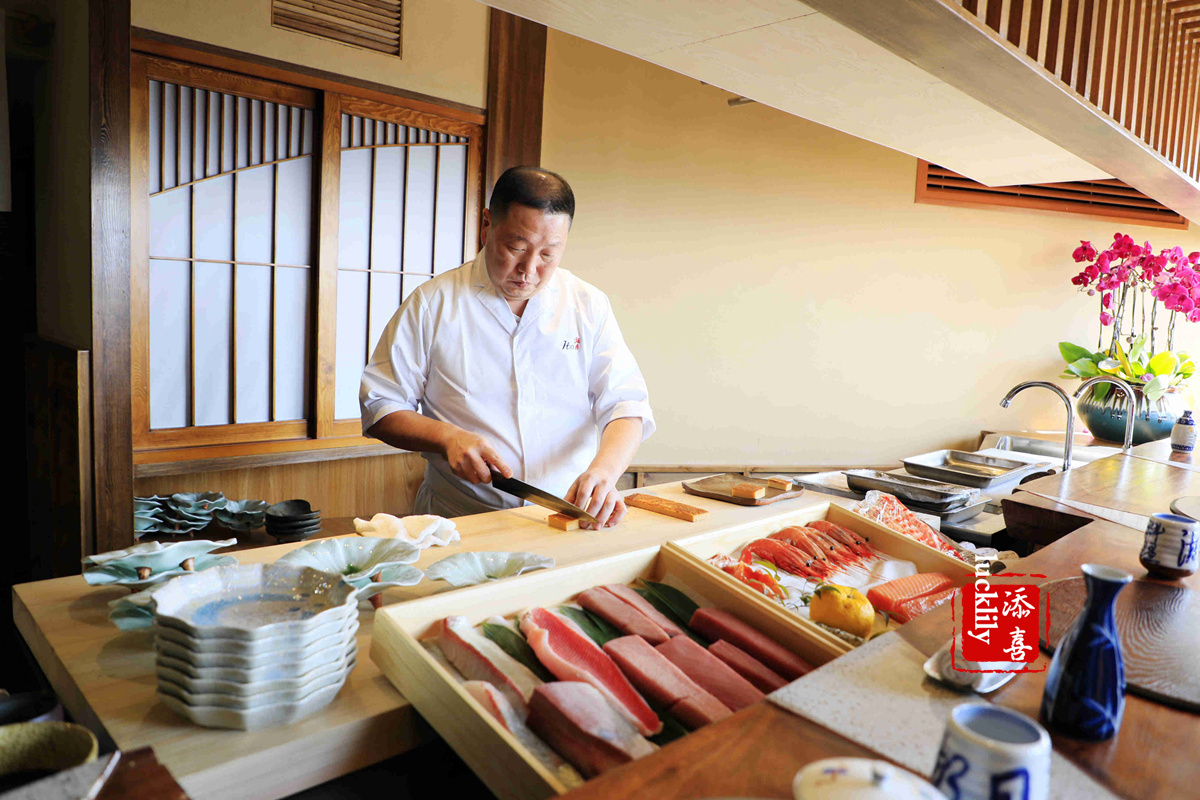 so we never know about the chef between the story of Itou San, who has 35 years of seniority of the post who once worked for sushi, Japan a 200 year old sushi shops "crane eight, 2012 Michelin was named star restaurant, but the owner did not want their restaurant in any restaurant guide on the influence of the familiar business, so angry as Michelin complaints, after the revocation of the stars. At that time, Ito Sang was the sushi man of this sushi shop. Mr. Itou San has many celebrities, stars, and even the president made sushi, but he really is very amiable, I photographed him, he would laugh shy, but said, remember to put some of his thin repair, ha ha ~ ~ I promise I upload the map and without beauty, because I will not also, think he didn't need to show enough energy, gas field!

come to talk about the environment, the rotating restaurant pattern of Japanese restaurant and friendly hotel top Lake of the moon is the same as that of the shopkeeper specially imported a German Glass whole surface completely seamless, with a large crane to the 18 floor, so the restaurant ring wall, basically through the floor windows, be worth to expect the moon night, also with the lake of the moon's marriage.

sat on the stage at a sushi chef, who handle those fish and shrimp meat, rice and vegetable roll, segmentation, is a kind of enjoyment. The tableware in each seat will be slightly different, because many of the handmade tableware made from Japan are unique.

I'm not very good at describing the taste of the dishes. For the delicate taste of the taste buds, the expression of any one of the words is pale. I can only say is really delicious, never tasted so delicious sushi, thick meat, fragrant glutinous Steamed Rice, rich and meet the entrance taste, eat sushi really want a big mouth, put into the mouth of the sushi feeling is the best, Hoshi Zushi impressed me the most profound the day before, feed eel are generally roasted, and lake of the moon star Eel Sushi in eel seems to be steamed out, full in the long and thick cover of rice and vegetable roll on the mouth

From: 「杭州美食推荐」曾经拒绝了米其林，这位35年年资的寿司职人现身湖月日本餐厅
Translate by: Baidu Translate .