original title: Elon Musk again sent Twitter, together to watch the next big action in Tesla 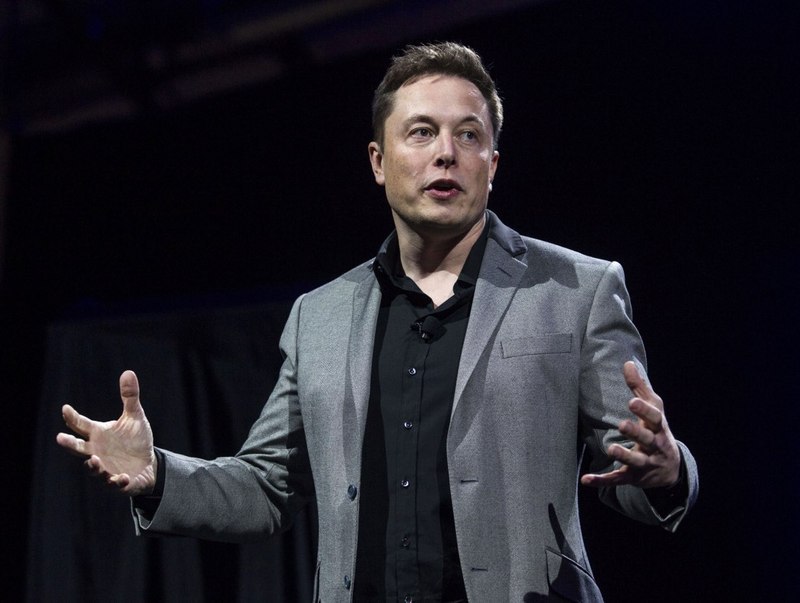 Tesla's Model 3 capacity problem has been resolved, and today the Twitter may be the first evidence from the official.

as usual, at the end of the year, Tesla CEO Elon Musk will give a verbal thanks to the Tesla owners around the world at Twitter. This year's "annual acknowledgement" was placed yesterday: 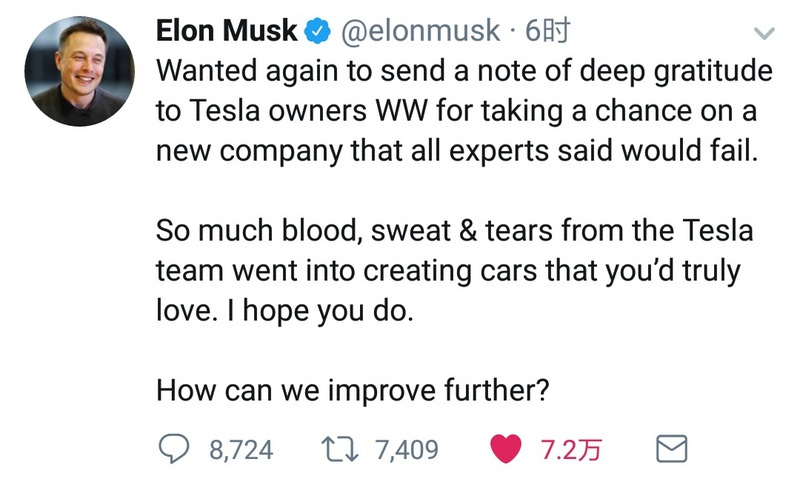 I want to express my deep thanks to the Tesla owners all over the world, and thank you for giving all the experts a chance to say that the new company will be defeated.

team invested too much sweat even tears in building products, hope you can really love Tesla motors.

how can we do better?

eating melon people to see that the boss this is the time to find out the most serious experience of the Tesla car experience, everyone began to pour bitter water.

is the first problem that embarrass Musk. The car carrying Tesla Autopilot 2 hardware and software began mass production in October last year. At that time, Musk announced publicly that the automatic driving technology demonstration will be completed at the end of this year from California to New York as long as 4500km.

unfortunately, after that, Tesla Autopilot team began the technical personnel change frequency, especially in July this year, Tesla Model 3 exposure can be produced after Musk and CTO JB Straubel directly to the super battery factory, and to solve the problem of Model 3 battery production...... The previously promised technical demonstration node was also delayed from the end of 2017 to "the next several months". 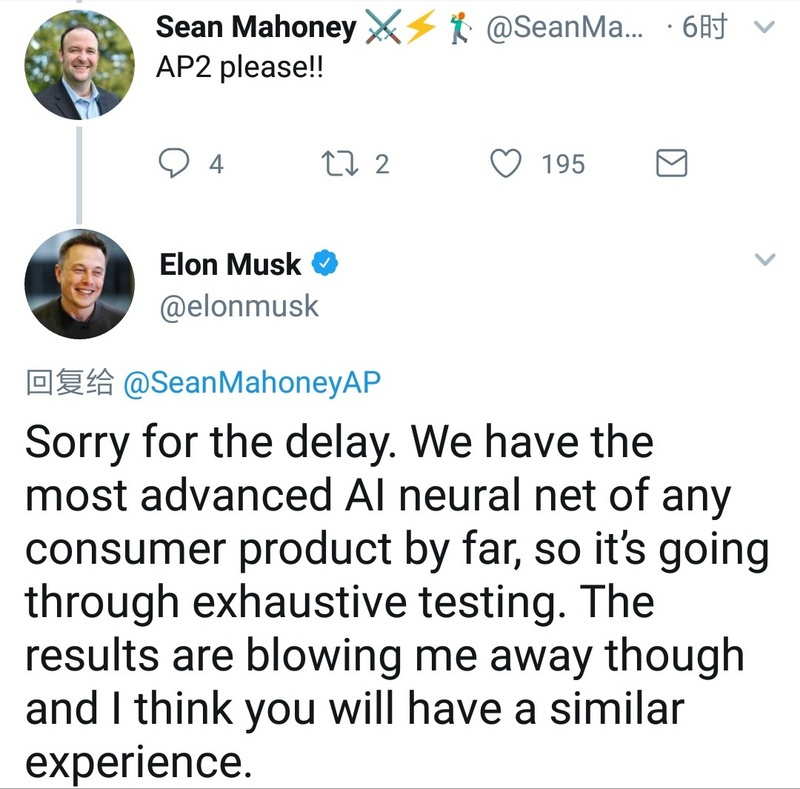 , so Musk is very sorry, but he reiterated that Autopilot team has developed the most advanced AI neural network in the consumer products. The experience of the new system has shocked him. I believe that Tesla owners will have similar feelings, but they need further testing.

, but Tesla owners may not wait too long. As early as two months ago, Tesla said that the new feature has been running millions of miles under the shadow mode of Autopilot 2 vehicle to test reliability, and the new version is expected to be released to the owners of the world soon.

is followed by some more trivial details of the experience.

a car owner says it likes Model S, but the browsers in the big screen are not available. The suggestion is to add night mode, otherwise it will not be able to use at night. Add mobile version of web browsing option, at present, the efficiency of sliding and browsing most websites is too low. 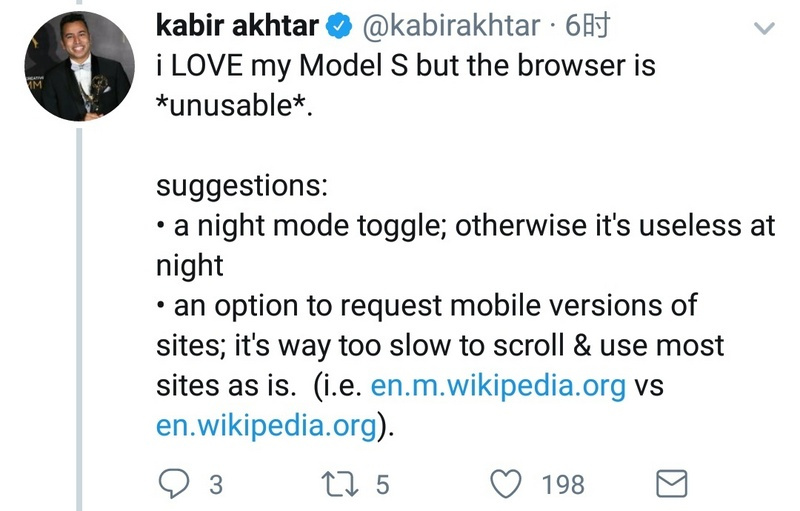 awkward atmosphere, this is actually another Musk and bounced several times repeatedly promised to update. Musk appease, yes, it does not use it. Linux OS and a bunch of drivers must be upgraded, and major browsers will be pushed to all cars in the next few months. But notice that at first it will be slow until the code is finished.

next problem, the car owners in northern China are concerned about the pain spot bug: can we pre heat the windshield, rearview mirror, seat and steering wheel through APP, and Musk promises to be added in the next update. 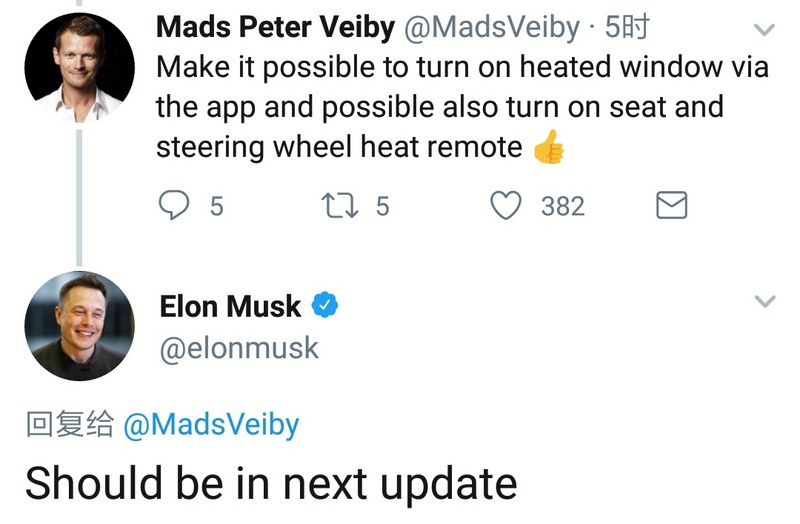 's suggestion is that it is hoped that the car can automatically adjust the speed of the wiper through the rainfall sensor. Musk says Coming very soon. is not an accident or the next update. 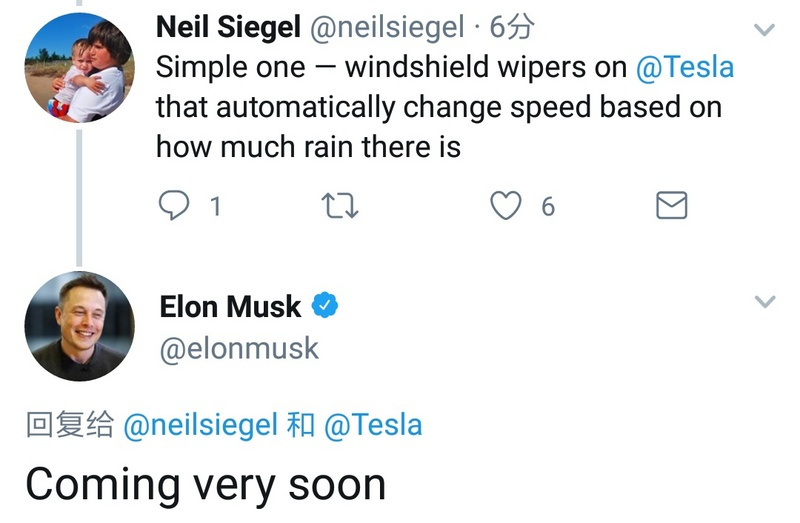 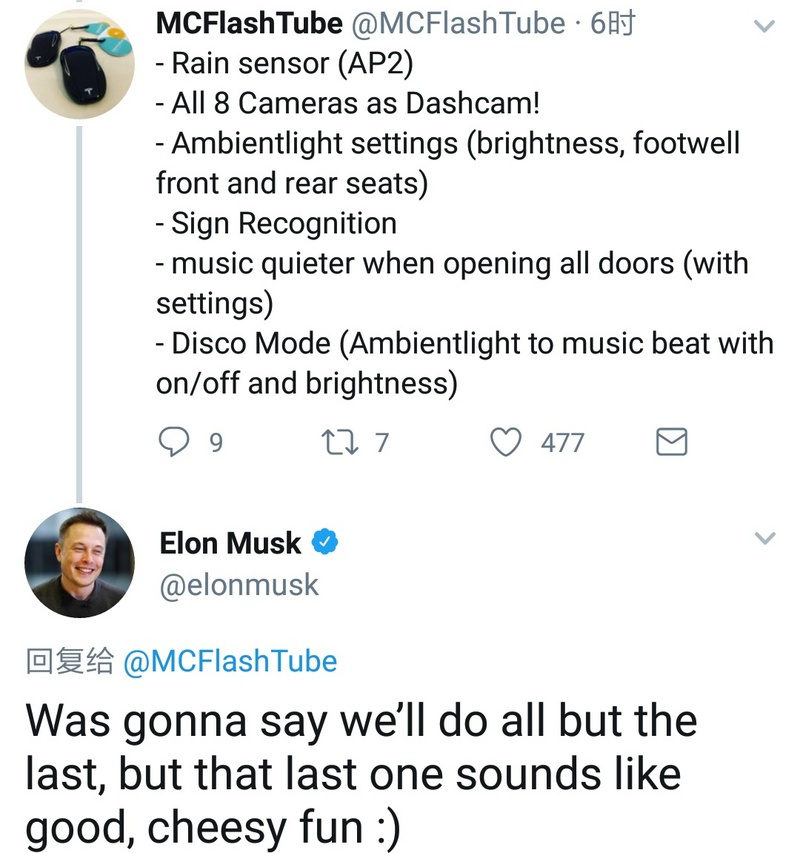 Musk took all the advice at one breath, except for the final "disco mode," but he also said that disco was fun. Considering the Tesla nearly two years of "Christmas" model updates are funny wind, so do not rule out the "disco" mode may in other forms reflected in a future update.

the car owner's area is likely to be public security: if the car is broken by the external force, it is hoped that the camera can start and record the scene immediately. Musk should also come down. 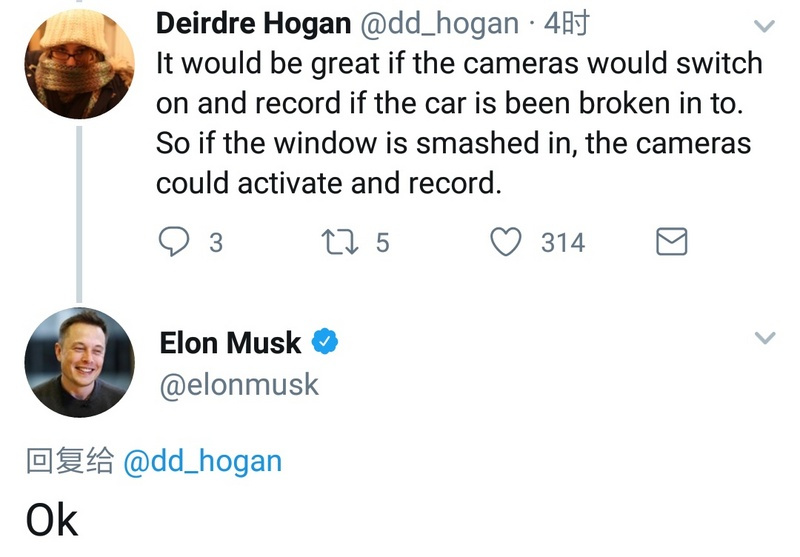 one owner of the vehicle navigation map: hope to have better navigation software. Now we have to navigate by the mobile phone, and there are other people