original title: technology and Ethics: 36 krypton | gene: Magic cut in accordance with the wishes of the design of DNA, to create the perfect individual

36 set up specifically for the study of krypton krypton [36]: column, screening some books worth reading, and provide some Digest. I hope you have a good book on hand so that the book will continue. 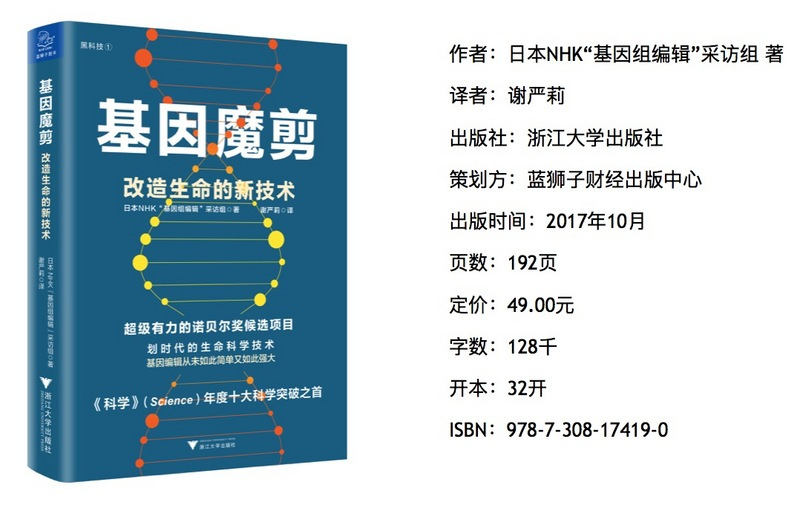 food crisis, energy crisis, all the diseases of human being helpless, through genome editing, can see the hope to solve it!

genome editor allows us to design DNA and change organisms as we wish.

has made epoch-making progress in genome editing technology. Its operation is very simple, and researchers who have knowledge and even undergraduates can operate by themselves on the Internet. As a result, this technology has exploded in many fields. Science, the academic journal, selected genome editing technology as the top ten scientific breakthroughs of the year, and regarded it as the most representative of the development and achievements of the scientific community.

, which existed in science fiction, has become an immediate reality. However, this technology has also brought legal and ethical issues, and it is urgent to think about the whole society.

NHK Osaka and Kyoto Bureau formed the project group in the fall of 2014 to produce a program for genome editing. The new technology of transformation of life, the forefront of genome editing, was released in July 2015. As the first time to introduce genomics editors to the public, it has aroused widespread concern.

Preface: genome editing and iPS cells -- for the future of human

2012 winner of the Nobel prize in physiology or medicine

so far, human beings have been modified in a variety of crops, livestock and fish species, and most of all, is to change the gene by accident as an opportunity, through the Months and years pass by. repeated mating, every little bit accumulation.

The genome editing introduced in

is a technology that can aim at a target gene and operate it alone. Through this technique, the goal of "changing the way specific genes work" can be achieved relatively easily. In other words, with this technology, it is possible for us to change the specific gene of a specific organism and transform it into another form, which is more valuable for the future of mankind. This also means that, compared with the past, the time we need to complete the variety improvement will be greatly shortened. You know, just a few years ago, this technology was also regarded as an astronomical night. As an ordinary researcher, I am still often shocked to this day.

as early as 30 years ago, researchers have developed the technology to "operate on the premise of ensuring that specific genes are not affected." I traveled in 1990s to the United States to study the oceans, gene manipulation. If we want to use this technology, it will take more than a year to operate for single gene, and this technology can not edit multiple genes at the same time. So far, animal experiments have only mice.

in 2010, gene operations in the field of sudden rise of technological innovation greatly, called "genome editing technology" is born in this time, it can be applied to any species - whether mice, fish or plants, even human beings can be used, but the success rate is very high. With genome editing technology, researchers can change target genes with a few success rates, and more importantly, anyone with basic knowledge of genetic engineering can do this kind of operation relatively easily.

- technology itself is simple and easy to do

- can be applied to all kinds of biological

before this, almost never have any life science and technology can simultaneously have the above three advantages. I have been engaged in basic research for 25 years, and this technology should be the most revolutionary life science technology born in these years.

today in Japan, scientists are using genome editing techniques for various studies. For example, we hope to develop monkeys that have transplanted a variety of human cells but rarely produce immune rejection. The only way to achieve such results is to modify the monkey's genes at the fertilized egg stage, that is, the genome editing operation.

has existed before, there are also animals of the same nature, such as white mice and so on. They are frequently applied in medical research such as human cell transplantation. But even if it is an animal, the value of the monkey, a larger mammal more similar to humans, is quite different from that of the mice. It is an epoch-making breakthrough in the field of medical research that can be used to transplant human cells by genome editing.

genome editing technology has indeed promoted the development of medical research. But at the same time, we must