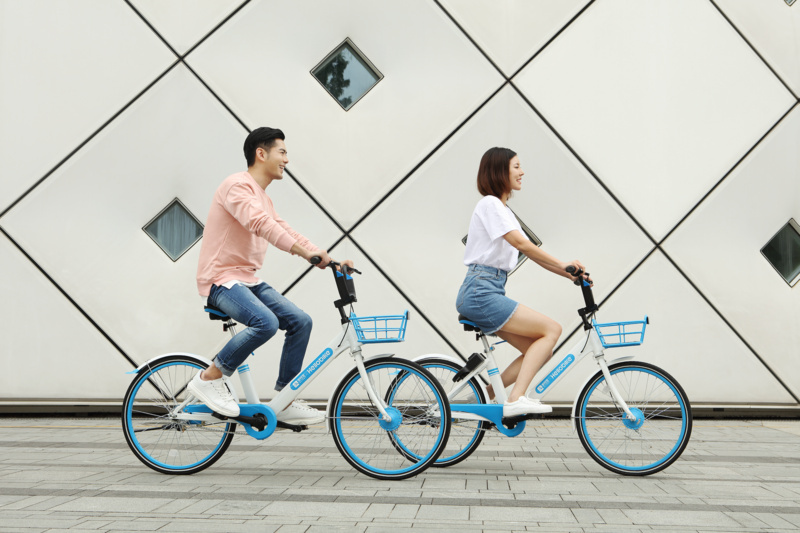 On the morning of December 27th

2017, the harrow was merged with the Yongan line of low carbon technology limited. Since June this year, has been conducting a series of harrow cycling movement, a large travel game: relying on big data sharing riding bicycle and mass, established the "3510" travel strategy, construction of "4+2" (two + four round) business model, large travel ecological platform for the development of three-dimensional, intelligent.

strategy is a new approach to

2016, the harrow single car was set up; in November, two months later, the first vehicles of the harrow's single vehicle began to be put into operation. But the harrow did not enter the first line of the Red Sea. At the time of the two or three - line city, sharing a single car was still a blank. The founding team of the harrow's single car after repeated analysis, the two or three line city short trip market will have a huge amount of long tail users. Therefore, hello to avoid cycling first-tier cities, went straight to the two or three line of the city, quickly gain a foothold in Hangzhou, Ningbo, Wuhan, Xiamen, Dongying and other places, and won a large number of users of all ages, entered a rapid development period, and soon became a share of the first, the user stickiness leading bicycle brand 234 line city market.

2017, harrow management also established a three dimensional shared travel strategy of "3510" (3 kilometers, 5 kilometers, 10 kilometers), and began to layout intelligent and large travel area. This also allows the harrow to become the first single car enterprise to share the multi - dimensional travel tools of the shared bicycle industry. In September, the harrow took a strategic partnership with the city of Dongying, Shandong, and the harrow bike was used as a city smart traffic operator to help Dongying build a smart travel system. At the same time, bicycle and car v-mark harrow jointly announced the launch of the "4+2" (two + four rounds) cooperation, this model is also the first landing in Dongying.

10 the end of the month, hello bikes and Yongan low carbon science and technology merge, hello cycling CEO Yang Lei as the new company CEO. Harrow's bicycle has also become an important strategic partner with ant gold clothing, deep venture and Yongan. With the support of stronger capital and shareholders, the development will increase further.

as of December 22, 2017, harrow bicycle has entered more than 150 cities, with 88 million registered users, 10 million daily orders, and more than 140 scenic spots. At present, harrow team clear "3510" three-dimensional travel sharing strategy has started landing in many city, representing the 3 km, 5 km, 10 km and above the sharing travel tools into the breakdown of the travel scene, including the city of comprehensive transportation solutions, to provide more diversified way to travel for users, users solve the city short and long-distance travel demand.

cycling always focus on the iterative upgrade to two vehicles operating safety and comfort, currently on the market the largest number of bicycles 3 vehicles using full version of Hello Aluminum Alloy frame, collocation ergonomic adjustable vacuum one seat, the vehicle is more light and comfortable, 0.99 seconds speed lock, try to use the optimal cost of production cost of industry the best vehicle. "Good ride" is the label of harrow.

harrow, an investor of a bicycle, revealed that they spent the whole two days collecting all the user reviews on harrow's bicycle online, and then decided to invest in harrow bike. "With a user, you can really have a market. Such enterprises must be worth investing. " The investor said.

The efficient operation of

vehicles can not be supported by technical support. Harrow bicycle developed the intelligent big data platform "Harbert system", remote commanding and scheduling of vehicles, and record every vehicle's riding trajectory and vehicle status. The "Harbert system" also effectively connects the vehicles to the BOS terminal of the front-line personnel, so as to realize the scientific delivery of vehicles and the intelligent and efficient management. At present, the big data of the bike ride has helped many local governments in the cities to optimize the local traffic management.

is reported to be the leader in the industry as it costs 0.3 yuan a day for each single car. Hello bicycle or shared the first on-line bicycle industry electronic fence bicycle enterprises, early in March this year, a new generation of networking technology based on electronic fence technology developed in Xiamen District of Jimei on the line, the bicycle master Hello electronic fence technology two techniques, and conducted experiments in many settled in the city to solve the problem, the bicycle Luantingluanfang sharing from the technical aspects of governance, so as to realize the win-win situation and the management of local government departments.

Investor: why do we throw the harrow

Fosun Fosun senior vice president of new technology and new economic Industry Group CEO Pan Donghui said that as a green bike sharing way to travel, should be within the scope of national first-tier cities rather than exclusive travel inclusive infrastructure, but also in the industry norms